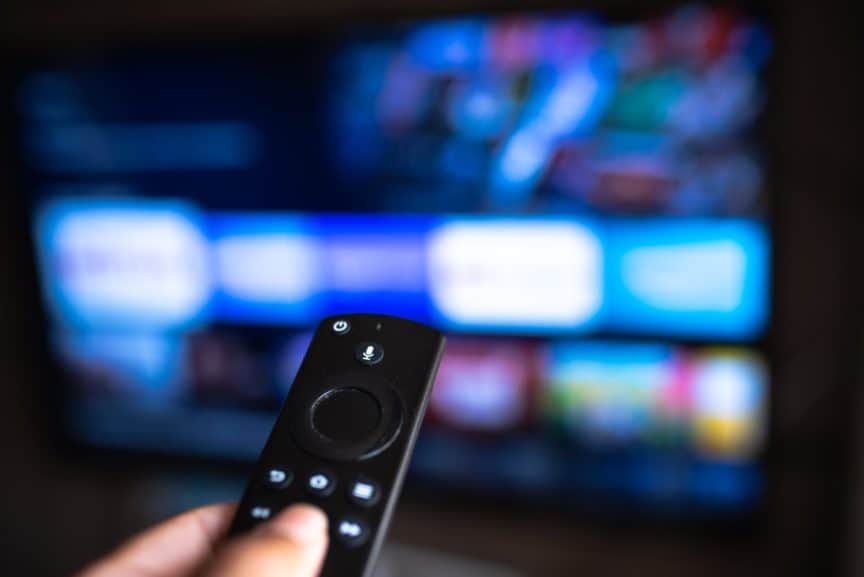 The Amazon Fire TV Stick brings a wide range of streaming apps straight to your television. While it’s designed by Amazon to promote its Prime Video service, the device is able to stream everything from Netflix, Disney+, and Apple+ to YouTube, Spotify, live TV, and more.

I use a Fire TV Stick on two different TVs in my home, but over the past few years, I’ve taken one of them with me on the road, with varying degrees of success. Below is my experience using an Amazon Fire TV Stick while traveling nationally and internationally in Airbnb’s, hotels, and motels, and the benefits and limitations I’ve encountered along the way.

The Fire TV Stick plugs directly into a television’s HDMI port. It also needs power, ideally by being plugged into a wall outlet using the USB cable and power adapter that comes with the device.

The remote has a number of controls, including a navigation wheel, volume controls, mute, and app buttons for the most popular streaming services. There’s also an Alexa button, which enables voice command. It’s powered by two AAA batteries, which are included.

There’s one more piece you may or may not need, depending on the TV you’re using and how it’s set up: an HDMI extender. It comes in the box, and helps you reach the HDMI port if the TV is installed right up against a wall, with no space behind.

How Well Does the Fire TV Stick Travel?

Physically, the Fire TV Stick is quite small, and so is the remote it comes with. I’m easily able to fit all the pieces inside my tech bag without having to worry about the device adding too much weight or space.

The remote requires a pair of AAA batteries, but assuming I remember to put in fresh ones before I leave on a trip, they won’t need replacing: they’ve never run out during a trip, even when I’ve been away for two months or more. I wouldn’t bother bringing extras along anyway, since AAA batteries are easy enough to find.

For me personally, it’s compact enough to take on any trip. That said, I don’t travel with just carry-on bag. I travel with my partner, and between us, we check one large backpack and have another carry-on for technology and other important items.

If you’re someone who needs to fit everything you own into a carry-on backpack, the Fire TV Stick and its extra cord and remote may not be worth the extra space and weight.

There are both pros and cons to using the Fire TV Stick while traveling, and each accommodation will be different. The device is simple to use, light to pack, and connects in seconds, but you may have difficulty physically setting it up, depending on how the TV and power outlets are situated in the room.

Can You Use a Fire TV Stick Internationally?

The short answer is yes; you can use the Amazon Fire TV Stick internationally, but there are some limitations.

In Bansko and Playa, I was able to connect the Fire TV Stick and use it at the Airbnbs I was staying at. It connected the exact same way it did at home, and gave me access to all of the same applications I usually used. I wasn’t able to use the Fire TV Stick in Albania, but that was due to the layout of my accommodations and a power issue, not connectivity.

Limitations came into play when accessing content on the Fire TV apps. Big streaming services, like Netflix, only give access to the movies and shows that are available locally. Netflix’s streaming rights by region change all the time, so you may find you don’t have access to a show you were watching at home. If you’re crossing borders a lot, you may have access to a show in Portugal, for example, but not Spain.

Apps that are only available in Canada don’t work for me outside the country. If I want to access these apps, I need to do so on my computer using a VPN. And even then it’s sometimes that’s not possible, because the service detects when certain VPNs are running, and refuses to work.

I know there are some technical workarounds for this, but I have an old MacBook and prefer to keep things as simple as possible. Plus, the whole point of me dragging the Fire TV Stick around is that I can stick it into the TV in seconds and have access to everything I want with a remote to control everything.

In practice, though, I’ve found that between the handful of streaming services I subscribe to, there’s absolutely enough content to watch when I’m traveling internationally.

You may run into issues connecting your Fire TV Stick in countries where the internet is restricted or censored. I haven’t run into this issue yet, but if you have, please let us know in the comments.

What Are the Limitations of Traveling with a Fire TV Stick?

As mentioned above, the Fire TV Stick needs to be plugged into the HDMI port of a television. Sometimes it’s as simple as plugging it straight into the side of the TV, but other times, you may need to use the HDMI extender.

Since the device sticks out about three inches from the TV, the extender is helpful if the HDMI port is facing the wall and there isn’t enough space to plug it in.

On quite a few occasions, especially in North American hotel rooms, I wasn’t able to access an HDMI port. Sometimes this was because the TV was mounted high up, right against the wall, or because the hotel had physically blocked access to the HDMI ports. This happens when they have their own custom hotel media center they want you to use.

Accessing power for the Fire TV Stick is often more difficult than accessing the HDMI port. The stick needs to be able to plug into both the HDMI port and a power source in order to function.

Sometimes there’s no available power source nearby in hotel and motel rooms. I’ve been in some rooms where the power cords for the TV flow down behind the furniture, and that furniture is bolted down or too heavy to move.

In other scenarios, the TV and other electronics may use up all of the available outlets nearby, so you’d need a power strip of some sort to add an extra outlet.

If you’re worried about whether or not you’ll be able to connect, you can sometimes tell by looking at the pictures of the TV, and where it’s placed in your Airbnb or other accommodation.

In theory you can also power the stick from one of the inbuilt USB sockets found on many televisions, but in practice it tends to be more difficult. Many of these sockets only put out 2.5W of power, and the Fire TV stick needs 5W to work reliably. You’re unlikely to know that level of detail about a random TV in your hotel room!

Multiple Pieces to Pack and Remember

You need to remember a few different components in order to use the Fire TV Stick: there’s the stick itself, the remote, a USB cable and power adapter, and the HDMI extender.

In the past, I’ve packed everything else I needed, only to forget the remote on my living room table. Without the stick, access to power, and the remote, you won’t be able to use the device.

Fortunately, I haven’t left parts of the Fire TV Stick behind at any of my accommodations yet, but it’s always a risk. If you travel with this device, make sure you check and double-check the back of the TV for the stick and cables, and nearby table tops for the remote, before you check out!

Not All Applications Work Internationally

For example, Hulu is only available in the US, so it won’t work on the Fire TV Stick when you’re traveling internationally. Similarly, Crave is a Canadian streaming platform that only works in Canada.

That said, when a streaming service like Hulu isn’t available outside of the United States, it means that many of the other streaming providers typically pick up that content to share with international audiences. You may find that you’re able to access shows and movies on Netflix, Prime Video, or Disney+ that weren’t available at home.

Even though the Fire TV Stick has some limitations when traveling, when it connects, it can also be an amazing device to have with you.

It’s a great feeling to be able to walk into an Airbnb, plug the stick into the back of the TV, and instantly have access to many of your favorite streaming services and the shows you’re currently watching.

Many accommodations these days have smart TVs that also allow you to log into and use your streaming services. What I love about having a Fire TV Stick with me is that I don’t need to take the time to log into every one the apps, and I don’t have to worry about security issues if I forget to log out again when I leave. It saves time and provides peace of mind.

If you have the space in your luggage, and especially if you’ll be staying in Airbnbs as opposed to hostels, hotels, or motels, it’s well worth packing the Fire TV Stick. Just make sure you set a reminder for yourself to pack all the pieces when you leave! 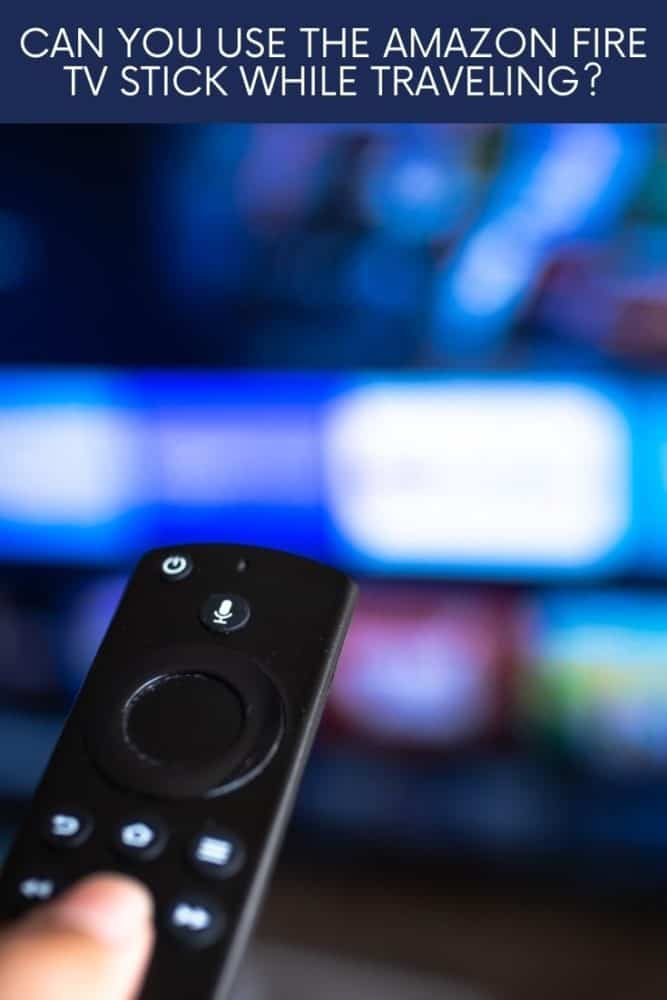