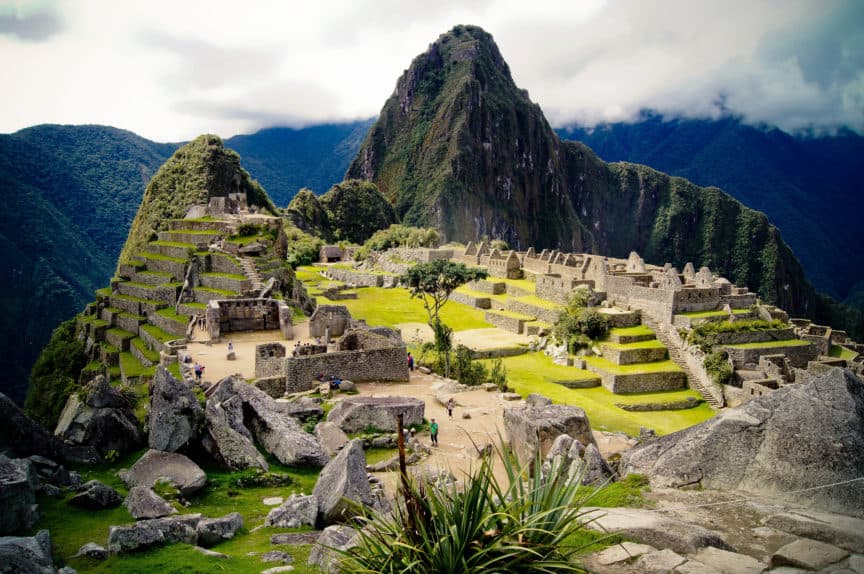 Hiking the Inca Trail is on many people’s bucket lists, and for good reason. That moment when you first set eyes on the abandoned city of Machu Picchu, having just hiked four days in the Andes mountains to get there, is likely to stay with you for the rest of your life.

The memory is a prize well-earned, since the Inca Trail is a strenuous hike. Despite being short (43 kilometers, or 26 miles, long), it runs over very uneven terrain, and the high altitudes add an extra degree or several of difficulty to the trek.

In such conditions, planning what to take can be a headscratcher, especially in terms of tech. If you’re wondering what will actually be useful, how to keep it protected, and just exactly how much tech is too much, read on.

What Tech Should I Bring?

Here is a list of the tech items and accessories I either brought or (sometimes badly) wished I had:

How Will I Carry it All?

If you’re getting sweaty just thinking about how to carry all your stuff, fear not. Unlike many hikes, you can ask for help by hiring a porter.

Porters are local men, highly versed in the ins and outs of the trail, who will carry up to seven kilograms (15 pounds) of gear for you for a fee set by the tour company with whom you will do the trek. In my case, it was $70 USD for the whole trip.

All of my luggage, including personal items like a sleeping bag and warm clothes, was carried by a porter. This freed me up to carry more tech than I otherwise would have.

For taking photos, I brought a Sony RX100, which is pretty small and light, but several people in the group brought DSLRs.  I’d advise against bringing extra lenses, though, mostly because the path gets pretty rough at times and you may not want the extra worry (or the extra weight).

Keep in mind that porters sleep in the kitchen tent. Therefore, and despite the convivial feeling of the hike that makes hikers want to linger and chat after dinner, I’d strongly advise against doing so, as porters won’t dare ask you to leave even if they want to rest right away. Bring a Kindle to keep you entertained if you go to your tent earlier than you plan to sleep.

Porters usually make little money, so even though tips aren’t required, they’re highly encouraged. Ask your tour operator how much would be appropriate — it’s usually around 70 soles ($20) per porter.

Try to also show your appreciation during the trek. Even if your Spanish is rudimentary, “por favor” and “gracias” is a good start. Take into account that for many porters, Spanish will also be their second language, as many are native speakers of Quechua.

Will the Altitude Affect My Electronics?

In short, the altitude shouldn’t affect your electronics in a noticeable way — but it’ll almost certainly affect you.

The trail goes as high as 4,215 meters (almost 14,000 feet) above sea level, with Machu Picchu itself sitting at 2,430 meters (nearly 8,000 feet). Soroche, or altitude sickness, affects everybody differently, with some people barely feeling it, while others (like me) can get very sick from the lack of oxygen.

Symptoms include lightheadedness, nausea, and shortness of breath, none of which are particularly pleasant to have at home, let alone during a strenuous hike.

One way to prevent it is to drink water by the bucketful, much more than you usually would. Water is provided on the trail by the tour company, and guides and porters will make it drinkable by boiling or treating it in some other way. However, this is sometimes not enough, and the water may still be too rough for your uninitiated stomach.

That is why we recommend you bring along a purification system as an extra security measure. Some people in my team, and many I spoke with after, did so and they fared fine. I didn’t and, without going into the painful detail, paid dearly for it afterward.

Is There Wi-Fi and Cell Signal on the Inca Trail?

There is spotty cell reception all through the trek, including Machu Picchu and the top of Huayna Picchu, but count on black holes lasting for several hours. Some days are better than others (day three is widely agreed to offer the best cell signal, although you may need to go to even higher ground to find it.)

I must point out I had a local SIM card with Claro, and had reception every day at least for a few minutes. I’ve since heard that other networks may not work as well, either when roaming or with a local card.

There is no Wi-Fi at all on the Inca trail. For Wi-Fi at Machu Picchu, some tour companies can provide a portable router for use in Cusco, the Sacred Valley, and Machu Picchu. Other than that, there are no available networks in the archeological site.

Will My Smartphone from Home Still Work?

Yes, either through roaming if your home carrier offers it, or with a local SIM card if the phone is unlocked.

Where Can I Buy and Top Up a SIM Card?

The best places to purchase a SIM card are either in the city of Cusco before starting the trek, or in Lima when you arrive in Peru (which is what I did).

There’s more information on how to pick a Peruvian SIM card here.

Will I Be Able to Charge My Gadgets Every Day?

There’s no way to charge your electronics on the trail, other than with batteries you take yourself.

A portable battery will come in handy, as will a solar charger in case the primary battery dies (or if you didn’t bring one, as in my case.) I took a small Dizaul, which I hung on my belt during the day and used to charge my smartphone at night or as needed.

It worked decently, even when the weather was overcast. You won’t be able to fully charge your device, but it was enough to keep it going all four days of the trek.

Obviously, you’ll be able to charge in Cusco before the trek, or in Aguascalientes afterward if you decide to stay there. Electricity in Peru is 220v/60hz, and it alternates between flat two-pin outlets (US-style) and round two-pin outlets (Western Europe-style). Remember to take a travel adapter if you need one.

What’s The Best Way to Protect My Electronics?

Rain can strike any time on the trail, even in dry season (May to September) but especially in the November through March wet season. I hiked in August, which is dry season, and isolated showers still struck throughout the trek.

Make sure to bring some kind of water protection for your devices, such as a dry bag or water-resistant lining.

Are There Any Must-Have Apps for the Inca Trail?

Due to the spottiness of cell reception during the trail, don’t count on any apps that don’t work offline.

Maps aren’t really necessary, given you’ll have a guide the entire time. If you’d like to follow along, Google Maps in offline mode can give you an idea of where you are at any given point.

If you don’t speak Spanish, Google Translate will come in handy for communicating. Guides will speak decent English, but as stated above, porters rarely will. Be sure to download the offline Spanish language pack ahead of time.

For those prone to altitude sickness (I’m such a wimp in that regard, it’s not even funny), it doesn’t hurt to know if you are going high or low at any point, with either a device or an app such as Elevation Tracker or Altimeter.

Could I Still Work Online?

You definitely won’t be able to work while on the trail, but can certainly get something done in either Cusco or Aguascalientes.

However, dealing with your laptop while hiking the Inca Trail is tricky. Hotels and hostels in Cusco allow travelers to leave the bulk of their luggage in a locker there while they do the trek, including a laptop, but you’ll be doing so at your own risk.

The only other option is to take it with you, even if you aren’t planning to use it at all. As you can imagine, that comes with its own set of concerns, from the threat of heavy rain and uneven terrain, to the extra weight if you decide to carry it yourself.

What Happens If Something Breaks?

You probably saw this coming, but there’s no way to fix anything that breaks during the trail (shocker, I know).

Depending on what breaks and how, you may have some luck getting it fixed or replaced in Aguascalientes, which has some small stores, but your best bet will be to wait until Cusco or Lima.

For fellow Appleheads out there, Lima has some official resellers and repair shops but no Apple store, which may limit just how much Applecare is able to help you.

Anything we’ve left out? What would you like to know about tech in the Inca Trail? 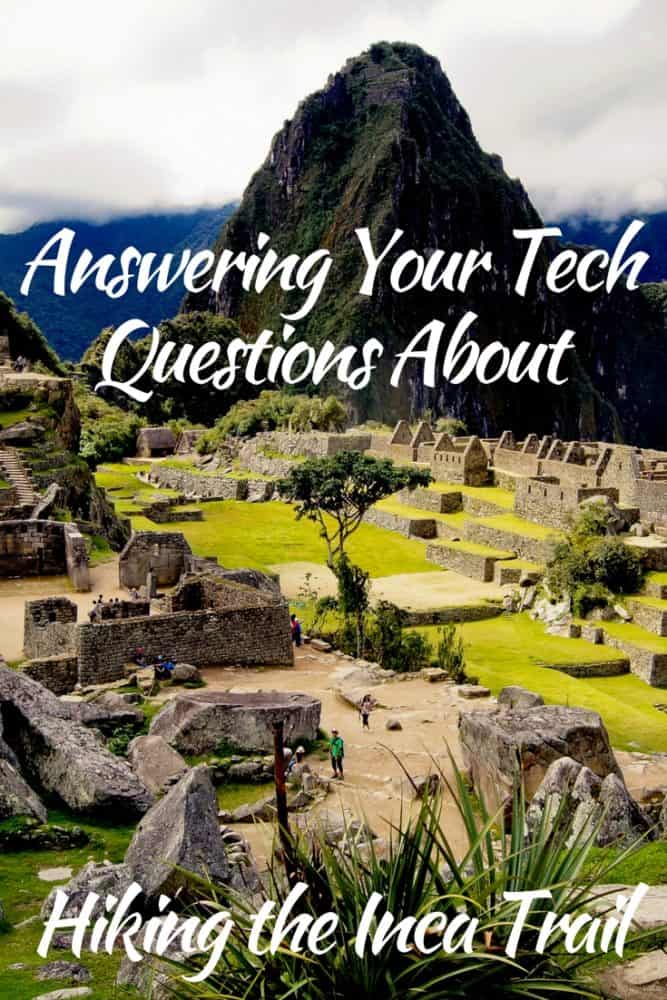